Top
You are here: Home / Uncategorised / Boost your immunity with the Mahamrityunjaya mantra

The Mahamrityunjaya mantra, also known as the Tryambakam mantra or Shiva mantra, is considered one of the most potent and powerful of all the ancient Sanskrit mantras.

This Mantra is used for healing and immunity for our psychic, emotional, mental and pranic (energetic) bodies. Therefore it can give us strength and stamina on all levels as it bestows longevity and can assist us in overcoming diseases.

On a deeper and spiritual level it is used to enhance our evolution towards enlightenment or Self- realization as it can purify our karmas of the soul.

The sanskrit word Maha means “great”, Mrityu means “death” and Jaya means “victory”. Therefore if repeated with faith, dedication and perseverance over a period of time, it gives us victory over the fear of death and leads us to immortality or liberation known as moksha.

The literal meaning of the mantra is as follows:

OM – The absolute reality, the sound of the cosmic universe

Who permeates and nourishes us with the fragrance (of supreme bliss)

By default your search is of the whole site but you can filter your search to particular categories by choosing from the menu below:

Get in touch with Che Yoga & Ayurveda Wellness at: 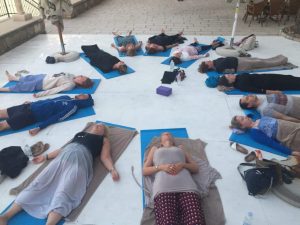 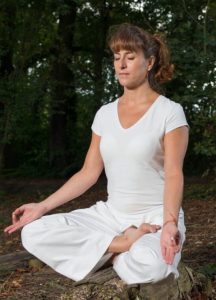 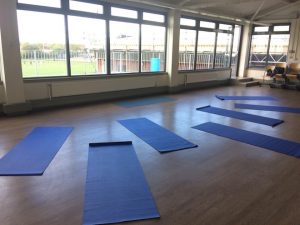 This beginner Yoga class is a mat based class, working slowly to tune into the body and allowing it to become supple and at the same time stronger. Geny’s yoga style is based on Ashtanga Yoga  END_OF_DOCUMENT_TOKEN_TO_BE_REPLACED
View Calendar
Add

I discovered Geny… and then I was hooked

I discovered Geny when she covered yoga classes at my local gym. I have since become addicted to her classes; would happily travel a distance to attend one of her classes. Her professional; friendly personality have made yoga an enjoyable experience instead of an effort.
I have asked for her treatment vouchers as Christmas… more “I discovered Geny… and then I was hooked”

I have had two sessions with Geny, she is professional and highly knowledgeable. The ayurvedic advice and suggestions she gave me during my consultation have proved spot on and I can see an immediate benefit. I had a fantastic massage with Geny which left me feeling very nurtured. I highly recommend Geny… go and book… more “Sue, Bromley.”

I love your yoga class and style of teaching. There’s something about yoga that is very personal and a lot depends on the vibe with the instructor. You are the best instructor I have found in the local area. You challenge me to my fullest but, at the same time, you are warm, inspiring, and… more “Best Yoga Instructor I Have Found Locally”

Thank you for all your encouragement, patience and humour! I shall keep an eye out for any workshops! Victoria

Going to a regular yoga class allows me to meet like-minded people and make new friends.  The bonus of having such a knowledgeable and committed teacher enhances the experience each week. Being a runner, currently recovering from an injury, I have been stretching my muscles for many years but find the intensity and variety of… more “Ann, Grove Park”

The outdoor sessions at Chinbrok Meadows are perfect. I really hope they continue for 2018. I and my daughter think Geny is an amazing teacher.

Geny is an excellent yoga teacher, she takes the time to help each person, the class is challenging and relaxing and my flexibility and strength have improved since attending these classes. I look forward to it each week.

I feel so lucky to be able to do yoga on Saturday mornings in my local community. It is a short walk from my house and at a time that suits me. The fact that it is very affordable means that I am encouraging my 22-year old and 15-year old daughters to come too. This… more “Tania, London”

I’m not sure you will remember me, but I went to your yoga lessons 3 or 4 times on Mondays fews months ago in Bromley. Unfortunately I couldn’t come anymore because of my au pair job, and now I’m back in France. But I wanted you to know that I discovered yoga with you and… more “Claire, Bromley “

I am a manager of Lewisham Disability Coalition which provides strategic support, project management, governance and financial support to Chinbrook Action Residents Team (ChART) Big Local Area. ChART Big Local is a 10 year programme, funded by the National Lottery.  Two of the residents’ priorities are Health and Well- being and Parks and Green Spaces.  Over the… more “Roz Hardie, Manager of Lewisham Disability Coalition”

Martina from London, about the Norfolk retreat

Dearest Antonia, Hsin, Geny and all you amazing people that have been sharing a little important piece of yourself with me during the retreat in West Lexham, Norfolkfor the Full Moon retreat. I would like to share some thoughts with all of you, being now 2 weeks since we spent that fabulous and deeply nourishing… more “Martina from London, about the Norfolk retreat”

Thanks so much for the Ayurveda consultation. It is so easy talking to you. Makes the process so much easier. I very much enjoyed this morning. I also thoroughly enjoy the yoga classes. My arms are so much stronger already, just need to work on the ‘slouching’.

Many thanks Geny, your classes are a joy to attend. I really do enjoy them. Your enthusiasm helps motivate the class plus going round  and correcting people is great. Maybe I’ll try the headstands though another week!